It’s funny how we build relationships with things like houses, or an old car or a favorite

chair. At some point they wear out or you move and for awhile there is a hole in our daily lives. A missing of that familiar item.

It appears you can have that relationship with trees. I know I am a gardener so maybe that has something to do with it but still.

There is a hole in my being that I did not expect and I am struggling to deal with it. It is a little struggle, one that is close to home and not as overwhelming as our national struggles. It is just something that I notice several times each day. Oh, its gone or wow the light it different here at this time of the day.

Let’s start at the beginning. I have had a love/hate relationship with an elm tree at the edge of my backyard. It is a scrub tree that grew on its own from a seed thrown to the wind by the giant elm in the front yard. It landed close to the fence on the south side of the yard. It is in the neighbors yard so it was not my place to move it or cut it down when it was young. I did go about trimming and removing those little seedling on my side of the fence that I knew were bound for trouble in the future. They were to close to the fence or to close to the house. They were in a location that was not going to work.

But this elm, I will call him Little Elm, was left to grow and grow he did. I must say he was a beautiful tree. There were summers when I trimmed the lower branches. There was also the summer I had the tree trimmers out to get all the Buckthorn out of the yard and trim the bushes. I asked the neighbors then if they wanted to take Little Elm down before he reached the roof line of the houses or grew into the fence. No they did not want to spend the money on it just them and it was a beautiful tree. So Little Elm continued to grow.

By day I would get frustrated with the heavy shade it now cast on the veggie garden and the need to create a new garden else where. I would think about that fact that it now was beginning to push the chain link fence over towards my yard. I was watching the limbs spread over the roof line of both of our houses and wonder about the next summer storm.

By night my love of Little Elm showed up. Once in bed my view out the window was of the branches reaching skyward. I used them as my gage for the wind and storms. I watched for the moon that got caught in his branches some evenings. In the late winter early spring I was sure I could see the growth of the limbs and would watch for spring leaves to unfurl. Little Elm was my touch stone before going to sleep and when I woke up in the morning. I even posted a few pictures of this tree out the window.

This summer the trees have been growing like crazy -lots of sun and lots of rain. The neighbor to the north needed to trim his giant maple to remove crossing branches and those that have reached over roof tops and decks. It was during this time I noticed the neighbor to the south also talking with a tree trimmer. She had discovered a tree that was rotting and was unsafe. I also shared with her that Little Elm was pushing the fence and resting branches on their roof line and soon it would be mine as well. I left it at that and waiting to see what would happen. I knew this tree should really be removed. My day time self knew what the trimmers would say.

Weeks pasted the tree remained and we headed to the north woods for a few days of hiking and visiting friends. I did not even think about the gardens or trees we were off exploring the woods and lakes of Wisconsin.  I had my fill of all kinds of trees and critters besides.

We returned home in the evening. I unpacked and wondered what was different. The light in the house seemed odd. It was late and I was tired so I curled up to read. After turning out the light to sleep I check Little Elm to say good night and realized there was a hole in the sky. No branches to be seen.

A quick trip to the deck told me the trimmers had returned and taken Little Elm. There along the fence line was a hole. All that remained was a few bits of saw dust and  the stump.

I should have been glad. My back garden will now have light, the lilacs will bloom next year due to more sunlight and the rock garden will also handle more sun loving plants.  Yet my heart was sad. My morning and evening touch stone was gone and I did not even see it go.

I know in the long run it is a good thing. Poor Little Elm was just in a bad spot here in the city. It was a tree that would need to come down at some point but still it was hard to see him gone. I still look for his branches at night and now look further out into the yard for a new tree to follow.

Relationships are funny. No words need to pass, just a daily checking in will due. A nod, a smile and a tap on the truck and we have a friend. Little Elm you will be missed.

Ok – I also have to admit that it didn’t help that just as I discovered the loss of Little Elm I began reading Katherine Applegate’s new kids book Wishtree. It is a story of relationships told from the view point of the tree. A great story – go find a kid to read it to and you will understand how I feel. 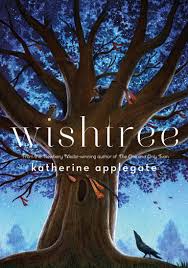 I am a retired Minneapolis Public School teacher. I walk, garden, care for my Grandson and write. Life is good!
View all posts by Joanne Toft →
This entry was posted in Uncategorized. Bookmark the permalink.